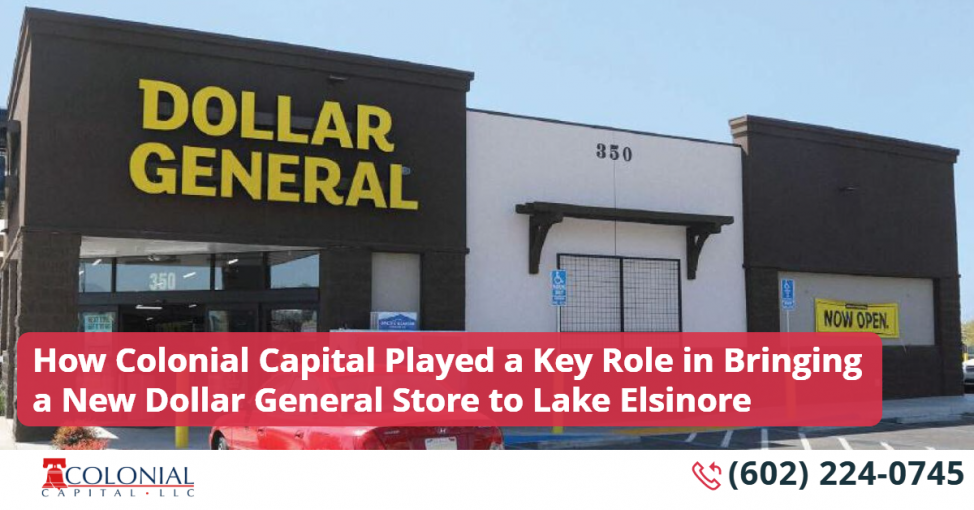 David Church and Carl Wood are real estate partners who build commercial buildings for retail and wholesale stores. When the discount retailer giant Dollar General announced the plan to start a new branch in Lake Elsinore, CA, they didn’t have to think twice to sign up on the project. Dollar General would be a great addition to their already impressive portfolio. Having worked with some of the leading retail and wholesale companies across the US, David and Carl had the experience and skills to complete the project successfully. And they found an ideal land plot for the project.

However, they didn’t have the capital to lease the land and get the project going.

As a private money lender in Arizona, Colonial Capital was able to give them a hand with an interest-only loan. Since we have worked with both the duo and Dollar General before, we were confident they would be able to make the repayments on time. We studied the challenges ahead of them and designed a plan accordingly.

Project planning in commercial construction can be very time-consuming. It may take longer than what is expected owing to many reasons like compliance hurdles, labor shortage, and technological and organizational complexities. Even if all works, materials, expenses, and quality mechanisms are planned ahead of time, the enormous risks involved apart from unpredictable factors may push the project completion beyond the stipulated time and result in cost overruns.

Changes in plans usually happen due to funding issues, unforeseen risks and uncertainties, deviations from initial designs, and changes in interest. When you take up projects with a high degree of complexity, designing, scheduling, and estimation can be challenging too. This is worsened when you have to seek approval from the sponsor every time you tilt from the initial plan. Environmental factors such as changes in the price of raw materials, changes in exchange rates, and inflation rates may put a dent in the budget at times. Setting KPIs, or key performance indicators prior to the commencement of the project will help minimize planning deviations and define the project scope.

Being reputed contractors, Carl and David knew the industry inside out. So, it was unlikely they would incur much delay due to faulty planning. However, if they don’t plan things ahead and procure resources on time, it would result in additional expenses.

Major cities in America including New York, Chicago, San Francisco, and Los Angeles are witnessing a population decline in the last few years. The trend picked momentum since the onset of the Covid-19 pandemic when the enormous rents became unfeasible for middle-income residents. Along with the rents, the cost of living in these cities is also on the higher end. The promise of a good career, educational opportunities, culture and entertainment, and higher living standards lure people into America’s biggest cities. However, the lifestyle is not always worth the money spent.

While New York, Los Angeles, and Honolulu have been pricey for a long time, cities like Seattle, San Francisco, Bay Area cities of Oakland, and San Jose joined the club recently because of the influx of tech companies. On the other hand, San Diego became popular owing to its proximity to Los Angeles and high quality of life. People are looking for feasible cities that can buy them a better lifestyle.

Work-from-home policies and public health shutdowns accelerated the exodus from these large metros. The pandemic shed light on the positive side of remote working. Companies, which have for long been against work-from-home, were given a chance to unearth the opportunities it presents. The cost cut-downs and increased work productivity have prompted many companies to offer employees the choice to work from home long after lockdowns were lifted. The trajectory of slow growth or decline in major cities has subsequently led to population growth in the suburbs.

Knowing CA is already an oversaturated market with little to no unoccupied land available, David and Carl have been expanding their aperture beyond the traditional city options, and have ventured into promising suburban areas, like Lake Elsinore.

Commercial construction projects can cost a lot. When you are about to start a significant project, you need money to invest. Often, when capital isn’t available on time, contractors are forced to push the schedule. Or else, it will result in further expenses. The delayed date of completion will lead to client dissatisfaction too.

When Dollar General announced that they were planning to start a new retail store in Lake Elsinore, CA, David Church and Carl Wood wanted to take it up. Reputed clients like Dollar General can give a boost to a real estate company’s portfolio.

Dollar General is targeting rapid expansions and has called for the addition of 1,050 stores in 2021. The population growth and influx of residents to CA make it an ideal market for Dollar General. In Lake Elsinore, it planned to build a 9,100 SF building that can accommodate an expanded variety of produce, fresh meat, checkout lanes, and an area with multiple self-checkout stations.

David and Carl found a 1.27-acre lot in Lake Elsinore that fit the requirements published by Dollar General. However, the duo didn’t have the capital to lease the lot. Since there are many construction companies in line to undertake the project, David and Carl were left with little time to source the initial capital. Despite their remarkable credit score and performance history, they didn’t apply for loans from public banks. By the time the loan is sanctioned, the project would have gone. They needed $2,090,000 to get the project going.

How Colonial Capital Stepped in with a Custom Loan

David and Carl approached Colonial Capital, an Arizona private money lender, for a custom loan to sign upon their new project. We have known them for a long time and have done many deals together. They are a reputed team of developers in the city and prompt on repayments, we didn’t have to do a deep background check on them again. The fact that their new tenant was Dollar General further strengthened their case. We have worked together with Dollar General before on a lot of projects. They have an extremely lucid and templated construction plan, which includes virtually the same square footage requirements across all stores. Their synchronized branding and operations have been key to their fast growth across cities. With a robust vision and a skilled team of managers, Dollar General shows promising growth in a suburb like Lake Elsinore. Apart from performance history, Dollar General also has excellent credit.

We granted David and Carl a custom interest-only loan of $2,090,000 with 8.75% interest per annum. The outstanding balance was due in 11 months from the date of the note. Approximately $76,198 of the loan proceeds will go to the interest reserves for the interest payments of the first 5 months.

The loan empowered them to lease the lot and kick-start the project without any delay.

Quick and Flexible Loans to Give Life to Dream Projects

As a direct lender, Colonial Capital offers asset-backed short-term bridge financing. We take care of all aspects of the loan process internally to give you a hassle-free experience when in need of emergency funds. ​​With over 75 years of experience in banking, finance and real estate investments, we can help you get started on projects that matter.